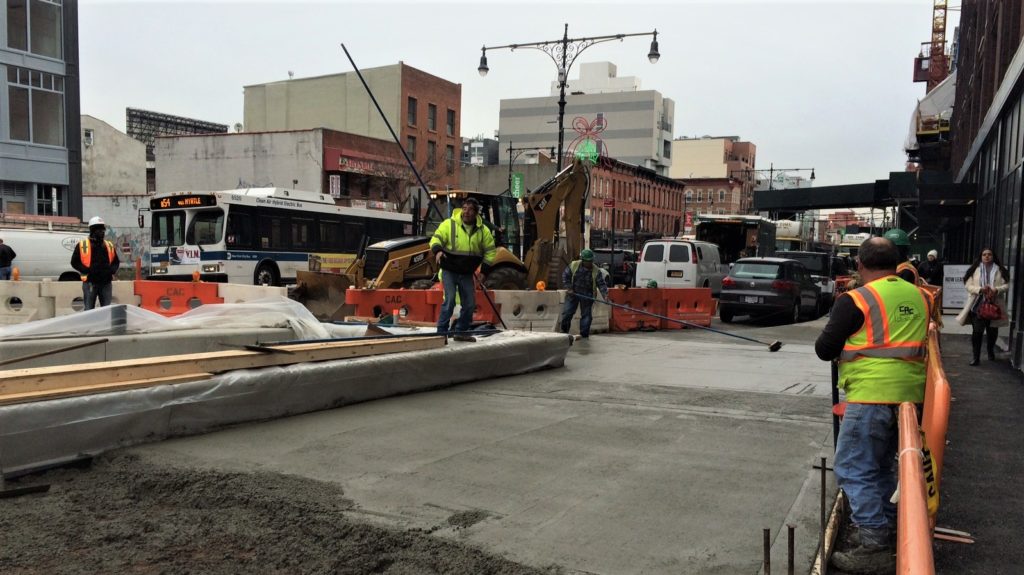 On Monday evening, over 100 people gathered for the Myrtle Avenue Brooklyn Business Improvement District (BID) 12th Annual Meeting at Cultura Pan Latin Cooking in Clinton Hill. The event provides an opportunity for BID Members – property owners, merchants, and residents within the district – to review the BID’s work over the past year.  The meeting closed with a forum for sharing the concerns of merchants who have been impacted by the prolonged construction of the new Myrtle Avenue Plaza.  Representatives from various city agencies and elected offices were on hand to listen to community members, pledge action for improving the construction process, and provide updates on the remaining construction activity.

The NYC Department of Design and Construction, who is responsible for managing the construction of the project, stated that the plaza will be fully finished by May 2017.  Additionally, concrete work is on schedule to be complete by December 25, 2017; with plantings and furniture installation occurring in early 2017.

The discussion around plaza construction followed the official business portion of the BID’s Annual Meeting, in which several directors of the board were renominated.  The four directors who were reinstated include Doug Bowen, Kevin Shirley of Apple Bank for Savings, John Dew, and Larry Hoy.  Additionally, board officers were re-elected: Dr. Thomas F. Schutte as chair, John Dew as vice-chair, and Larry Esposito as treasurer. Kevin Shirley was newly elected to the position of secretary.