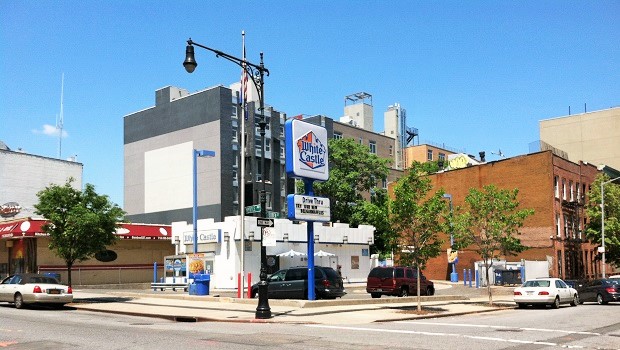 Plans were filled yesterday for a new 5-story mixed-use building at 533 Myrtle Avenue in Clinton Hill, which will replace the existing White Castle restaurant.  The proposed building will house 27 residential units and 5,900 square feet of commercial space.  The plans indicate that the development will not take advantage of the available Inclusionary Housing bonus.  The building is being designed by Karl Fischer, who is currently working on other projects in the neighborhood, including 134 Vanderbilt Avenue, which will replace the Gulf Gas Station at Myrtle and Vanderbilt.  He is also listed as the architect for 100 Steuben Street, a few doors down from White Castle, where a new 8-story residential building will rise.

All of these new buildings will face the new Myrtle Avenue pedestrian plaza which is set to begin construction this summer.  The 25,000 square foot plaza will run between Grand Avenue and Emerson Place, replacing the existing service road that runs parallel to Myrtle Avenue.  Additional street improvement, such as new sidewalks, curbs, benches and trees will be implemented along Myrtle Avenue between Hall Street and Emerson Place.