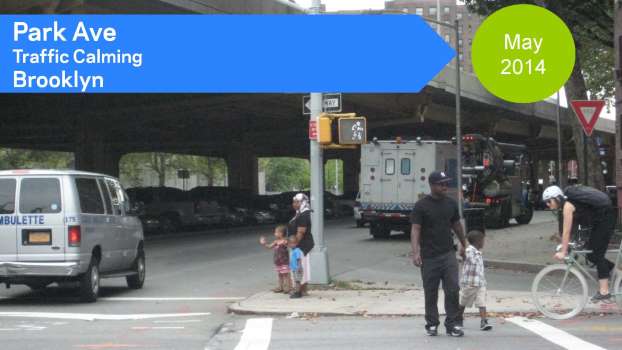 Following years of advocacy and community organizing by the Myrtle Avenue Revitalization Project (MARP), the New York City Department of Transportation (DOT) presented plans to improve traffic safety on Brooklyn’s Park Avenue between Navy Street and Flushing Avenue.  DOT officials unveiled their plan at the Transportation Committee meeting for Brooklyn Community Board 2 on Tuesday May 20, 2014 and the committee voted unanimously to support the proposed plans. Implementation is expected to occur in the fall of this year.

In 2012, MARP and Architecture for Humanity (AFH) released the Park Avenue Pedestrian Safety Plan, a set of proposals to improve pedestrian safety and calm vehicular traffic on Brooklyn’s Park Avenue between Navy and Steuben Streets.  The recommendations in the plan were developed over several years using information gathered at six public meetings, site surveys, and research.  There was also guidance from Community Board 2 and an Advisory Committee made up of representatives from local block associations, tenants associations, residential developments, community-based organizations, and city agencies, including DOT.  After the release of the report, MARP started a petition to enable a larger cross-section of the community to show their support for this plan.  Over 1,100 people signed.

Stay tuned for more information about the implementation of these safety upgrades.