In July, the Age-friendly Brooklyn Neighborhoods Collaborative, a three member-collective of the Myrtle Avenue Brooklyn Partnership, Age Friendly Central Brooklyn (AFCBI), and The New York Academy of Medicine (NYAM), was funded in part by a grant from Brooklyn Community Foundation’s Elders’ Fund initiative. The funding will support collaboration amongst the organizational partners to continue their work of supporting aging in place for older adults. Together we seek to ensure that the 28,000 older adults living across Central Brooklyn (Bedford-Stuyvesant, Clinton Hill, Crown Heights, and Fort Greene) have the tools and resources to age in place. NYAM will serve as the convener for this coalition, and host regular meetings to bring together participants, share resources, exchange ideas, and discuss future programming in keeping with the Collaborative’s mission. 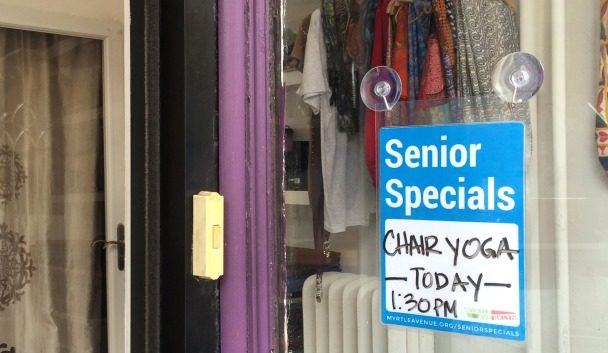 “NYAM is thrilled to partner with Myrtle Avenue Brooklyn Partnership and Age-friendly Central Brooklyn on this exciting grant initiative,” says Elana Kieffer, Acting Director, Center for Healthy Aging at NYAM. “This is a prime example of how we support age-friendly neighborhood organizations across NYC in the work they do every day to improve the lives of older adults in the communities where they live.”

With the three-year grant, totaling $135,000, the three-member coalition will work together to continue their support of older Brooklynites. This includes connecting older adults to resources, organizing advocacy and civic engagement, and free events and programs that connect them to local businesses, skill building, cultural opportunities and combat social isolation.

Brooklyn Community Foundation is on a mission to spark lasting social change, mobilizing people, capital, and expertise for a fair and just Brooklyn. Since its founding in 2009, the Foundation and its donors have provided over $25 million in grants to more than 300 nonprofits throughout the borough, bolstering vital programs and services while responding to urgent community needs and opportunities. In 2014, following a six-month borough wide community engagement project called Brooklyn Insights, the Foundation unveiled a new strategic action plan focused on youth, neighborhood strength, nonprofit capacity, and racial justice. Learn more at www.BrooklynCommunityFoundation.org.

Older adults in Clinton Hill and Fort Greene can join the Myrtle Avenue Senior Advisory Council, which meets virtually on the second Friday of each month and learn about upcoming free events for older adults by contacting Ryan Greenlaw at ryan@myrtleavenue.org or calling (718) 230-1689 ext. 4.

Age Friendly Central Brooklyn, Inc. originated in 2007 from newly designated Age Friendly NYC, a new partnership between the Office of the Mayor, The New York City Council, and NYAM. Next, New York City launched a pilot program in 2009 that featured three Aging Improvement Districts (AID). Bedford Stuyvesant was the only locally controlled AID whose residents were primarily of African Descent.  In 2015, the City Council expanded and renamed the initiative Age Friendly Neighborhood Initiative. It was then that the Bedford-Stuyvesant Aging Improvement District became the Age Friendly Neighborhood Initiative of Bedford-Stuyvesant & Crown Heights, now an independent entity known as AFCBI.

AFCBI, a community-based organization, led by a volunteer group of older adults that builds upon the rich experience of adults age 62 and older to ensure they can age in place. Through intentional outreach, AFCBI leverages local resources to improve their overall quality of life. Our Age Friendly Ambassadors engage other older adults in a myriad of activities to meet the social, economic, cultural and civic needs of this growing population. For more information contact: Donna Williams, secretary@agefriendlycb.org

About The New York Academy of Medicine

The New York Academy of Medicine (NYAM) tackles the barriers that prevent every individual from living a healthy life. NYAM generates the knowledge needed to change the systems that prevent people from accessing what they need to be healthy such as safe and affordable housing, healthy food, healthcare, and more. Through its high-profile programming for the general public, focused symposia for health professionals, and its base of dedicated Fellows and Members, NYAM engages the minds and hearts of those who also value advancing health equity to maximize health for all. For more information, visit nyam.org and follow @nyamnyc and @agefriendlynyc on social media.