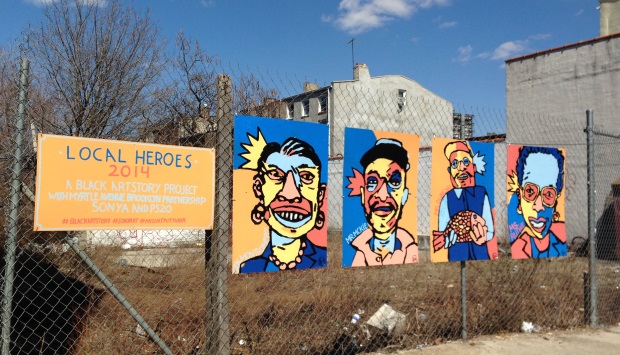 This past February, as part of Black Artstory Month, we asked our partners at South of the Navy Yard Artists (SONYA) to help us create a community mural featuring some of our very own ‘local heroes’. SONYA answered our call with this fantastic project featuring four of our very own local icons, painted in collaboration with community members, and inspired by the watercolor-style used by PS 20 4th graders in a project of the same name. Although this is a temporary mural project, these heroes have earned a permanent place in the pages of our neighborhood’s history book!

State Senator Velmanette Montgomery
Serving our district since 1984, Senator Montgomery calls Clinton Hill home. An educator by training, she continues to advocate for New York’s young people through efforts to reform of the State’s juvenile justice, foster care and adoptive care systems, and by by focusing on teen health. Not only is she a valued supporter of Myrtle Avenue, she is viewed as a role model and mentor by many local politicians that came after her.

Mr. McKie
Mr. McKie is the owner of Doo’s Barber Shop, which has been on Myrtle Avenue for just short of a decade and a half and is a neighborhood institution.  Mr. McKie emphasizes that he is not a barber himself, but he certainly steers the ship, opening the store after seeing a need for a barber shop. Doo’s has an excellent reputation for keeping neighborhood residents looking sharp with some of the freshest cuts around.  It’s a ‘family and friend affair’ at Doo’s, with nephew, son and long time friend and neighbor all part of the staff.

Gervan Duncan
Mr. Duncan was an active member of the Myrtle Avenue Merchants Association (pre-MARP’s existence), working hard towards creating an atmosphere where Myrtle merchants could thrive.  Mr. Duncan remains busy in the community, employing a staff who have largely been with him since the store first opened its doors almost two decades ago.  Duncan’s Fish Market has fresh fish and seafood catches on one side of the store and prepared foods like mac and cheese, steamed string beans and fried fish nuggets on the other. The image here is modeled after an iconic photograph of Mr. Duncan, featured in our Home Grown Locally Owned campaign.

Ms. Ruthie
The Ruthie’s mural depicts Ms. Ruth West, who opened up the first Ruthie’s restaurant in Fort Greene in 1968.  The eponymous eatery was opened at the strong urging of her children, who knew their mom’s gift in whipping up southern dishes she learned as a child in North Carolina, should be shared with the world.  Though Ms. Ruthie passed on just a few years ago, her name is still emblazed on Ruthie’s on Myrtle, owned by Ms. Ruthie’s son and daughter-in-law, John and Stephanie Monroe.  The restaurant continues to offer Ms. Ruthie’s recipes, serving up great southern classics, including  candied yams, potato salad, fresh fried whiting  and collard greens.