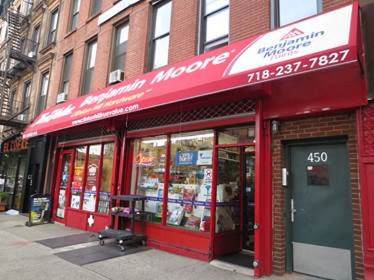 From now through the end of September, Clinton Hill Hardware located at 450 Myrtle Avenue between Waverly and Washington Avenues is participating in Benjamin Moore’s Main Street revitalization initiative, ‘Revitalize Our Town,’ and will donate $1 from the purchase of any gallon Benjamin Moore paint or stain to a MARP-sponsored mural project. MARP plans to use the funds to paint a portion of the fence at the site of the Silverstone development in partnership with South of the Navy Yard Artists (SONYA), helping to beautify the site during construction for residents and customers of nearby businesses. If you are contemplating a fall renovation project, stop by Clinton Hill Hardware for your paint supplies and support a great community project.

Alex Mendez, one of the owners of the family-owned and operated local hardware store stated, “we’ve been here a long time and witnessed firsthand many of the improvements to Myrtle Avenue since MARP has been around. We feel confident that they will use it in a way which generally benefits the neighborhood and that further improves the quality of life for all who are here.” Clinton Hill Hardware opened nearly a decade ago, but their commitment to community started much earlier. The owners (the patriarch of the family) previously served as manager of the Avenue’s former Adami Hardware store, and raised his sons (also owners of the business) right here on Myrtle Avenue.

Silverstone, the developer of the one story site which housed the Avenue’s Associated Supermarket will be built up to 7 floors. The construction has already begun and developers will also contribute funds to support beautification during construction.

Clinton Hill Hardware is located at 450 Myrtle Avenue between Waverly and Washington Avenues and can be reached by phone at: 718.237.7827.