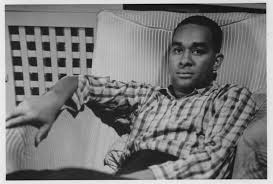 Author Richard Wright, who lived in Fort Greene in the late 1930s while writing Native Son.

To gain more recognition of author Richard Wright’s legacy in Fort Greene, we’re proposing the co-naming of Carlton Avenue in Wright’s honor. This campaign is part of SOME WORDS, Myrtle Avenue’s Black Artstory Month series in February 2020 that celebrates the legacy of Black artists and activists in Fort Greene & Clinton Hill whose words changed the world.

Richard Wright lived at 175 Carlton Ave, between Myrtle and Willoughby avenues, in 1938 when he was writing his most famous novel, Native Son. Wright’s “protest novel” garnered him international attention, made him one of the wealthiest Black authors of his time, and sold over 215,000 copies within its first three weeks on sale, largely in part to being the first book written by a Black American to be selected for the Book-of-the-Month Club list.[i] Literary critic Irving Howe easily summarized the book’s importance by saying, “the day Native Son appeared, American culture was changed forever.”[ii]

The co-naming would bring greater visibility to his former ties to the neighborhood and increase the representation of influential African Americans within Fort Greene’s public space.