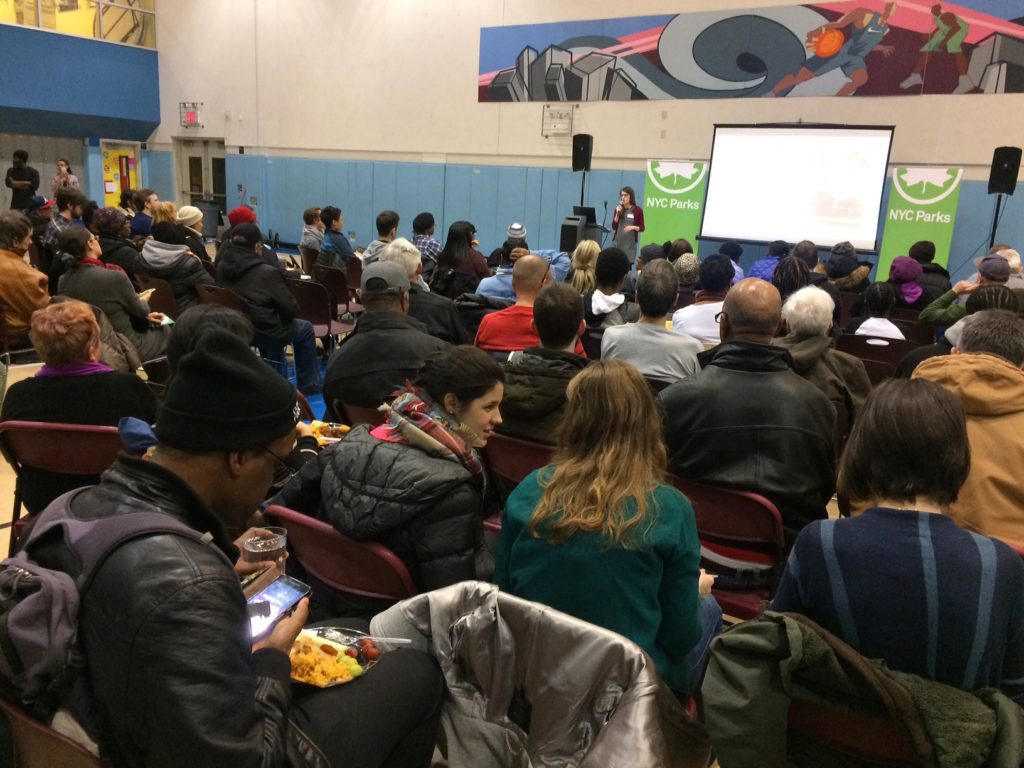 The New York City Parks Department held a second community input session Thursday night to discuss the upcoming $7M improvements to Fort Greene Park. The local park is one of eight selected by the department to receive upgrades through the new city-wide Parks Without Borders program. Over 100 people attended the event on Myrtle Avenue at the Ingersoll Community Center to hear initial ideas from Parks and to give their input on how the money should be spent.

The program is solely focused on making improvements to the north side of the park, along Myrtle Avenue. Local residents and parks department discussed ideas for improving a number of areas, including sidewalks and seating along Myrtle Avenue, basketball courts, fitness areas, barbecue areas, the plaza at Washington Park, and the entrance at St. Edwards Street.

Below are just a few of the ideas shared at the meeting:

First topic of conversation: possibly removing the mounds by the staircase. Hit ❤️ if you agree with any of the suggestions you hear tonight pic.twitter.com/Jam4vTAqgH

Q: Will bball courts be removed? A: No. And there’s opps to improve them or add more. Hit ❤️ if you wanna see more courts in #fortgreenepark pic.twitter.com/WxGQnaa7Z1

There’s a monument hidden in there. One suggestion: trim back or remove some trees to improve visibility of the Martyrs’ Monument pic.twitter.com/86MMFzMd42

Another suggestion: smooth the sidewalk along #myrtleave to make it easier, safer to walk on and reduce ponding. We give this idea 👍🏽👍🏽 pic.twitter.com/64WrGeqjUf